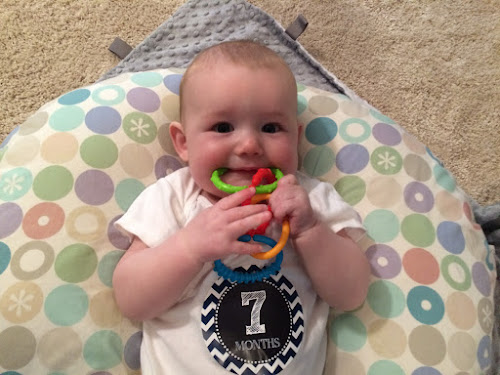 Our little peanut is another month old. He’s such a happy baby.

This month we have been trying lots of new foods and he loves meal time. He also loves feeding himself some snacks. I’m looking forward to the day when I can just throw some food on his plate and he will gobble it up.

Alex isn’t crawling yet, but man does he want to. He gets so frustrated that he doesn’t know how. He rolls all over the place, moves in circles and sometimes scoots backwards, but hasn’t figured out crawling yet.

He also chews on everything. I haven’t seen any teeth coming in yet, but he does love his chewing toys. 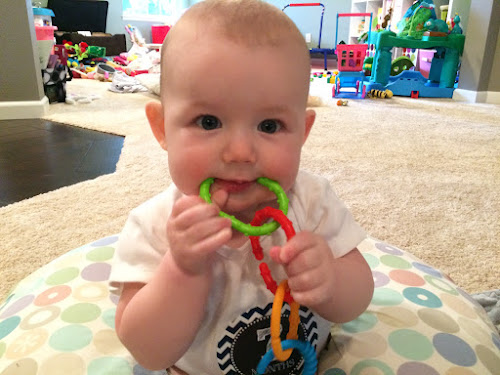 We are also working on sitting up. He loves sitting in my lap, but I still put a pillow behind him to sit on his own because he gets a little crazy and will throw himself backward. But he’s getting better each day and it makes him really happy to be sitting up. 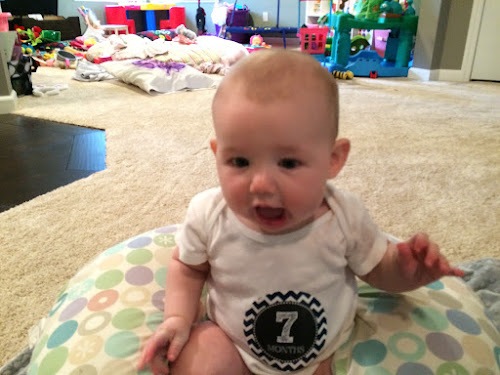 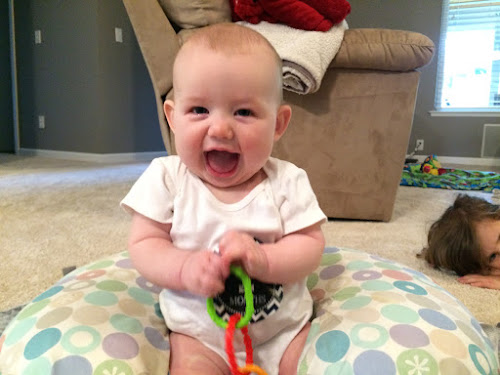 Alex has been sleeping through the night for a little over a month now. We started sleep training him right around his 6 month birthday and he sleeps like a champ. This kid knows when it’s his bedtime. He will start crying at me before nap and bedtime for his bottle. And he falls asleep pretty quickly after you put him in bed. I can’t complain. He’s been a great sleeper.

I’m surprised it took Maddie this long to put a bow on Alex’s head. But I know it won’t be the last time! The girls just love him to pieces and usually fight about who is going to be closest to him. 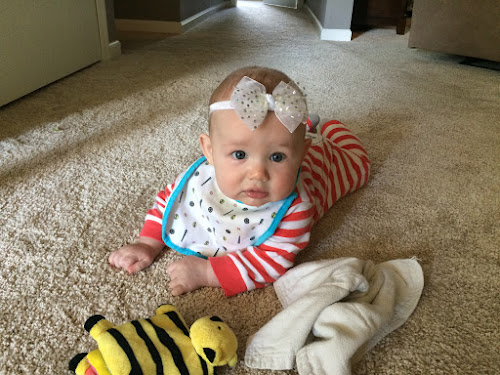 We are also at the stage where he will not sit still during a diaper change. It makes me bananas. And he’s so strong. It’s almost impossible to wrangle and diaper a squirming baby!

Not much else has changed in the last month. We love our smiley little guy and he’s such a charmer. He’s always making people smile wherever we go. Happy 7 months little monster!

This site uses Akismet to reduce spam. Learn how your comment data is processed.

I leveled up my yoga game and moved by the firepla

My first book of 2021 and some thoughts are on @mi

And we can’t forget this little cutie who is my

Dannie was so excited to finally get her Warriors

Load More...
This error message is only visible to WordPress admins


Error: API requests are being delayed. New posts will not be retrieved for at least 5 minutes.

Here are my results from my 2020 reading challenge

I’m probably going to get lots of comments about

Load More...
This error message is only visible to WordPress admins


Error: API requests are being delayed. New posts will not be retrieved for at least 5 minutes.

The kids had a blast when we grabbed food from chi

Here was the final view of the lake from the stree

Saw the most beautiful little catamaran on the lak

True story of why I’m a nutcase. While sitting o

This error message is only visible to WordPress admins


Error: API requests are being delayed for this account. New posts will not be retrieved.